I am so sorry for the rushed blog post last night! Brad and I were planning on coming home right after the show but it turns out this production has partnered with Broadway Cares and they had some amazing perks, including a backstage tour hosted by the Wizard! So we opted to do that (of course!) and blogging got cut short. So to make up for it, here's my thoughts on the show last night!

Overall, it was a great production. It's changed a bit since I saw it on Broadway (mostly just minor technical things or ensemble costumes), but it was still really solid. Elphaba and Glinda played off each other really well and they had a sense of humor I haven't seen in previous productions. Neither of them were my favorite leads I've seen, but they were both excellent. I was especially impressed with Elphaba's riffs. I also really enjoyed Doctor Dillamond! Fiyero and Boq were good but neither was very memorable. I was underwhelmed by Nessarose and Madame Morrible. However, the Wizard was the most amazing! Going in I had no idea that I actually knew of the man playing the Wizard...none other than Stuart Zagnit, the original voice of Professor Oak! (You can hear hints of it in his speaking voice, which made me happy.) He seemed to be really into his part and brought a really fun energy to the role. The ensemble was great too, and the only technical difficulty was a slightly wonky mic at one point, but these things happen. Everything was choreographed beautifully and the orchestra and lighting was wonderful!

The backstage tour was so surreal! Since I sat in the second row when I saw the show on Broadway, I've seen a lot of the props and costumes pretty close, but nothing like this! It was really cool to hear about how the Wizard's mechanical head works, and how much insane detail (and money) goes into all of the costumes. Glinda's blue dress weighs forty pounds! (For once in my life, I was really good and didn't touch any costumes or props! Unlike some people on the tour...adults, even! Honestly, it was awkward when the Wizard had to tell off a forty-something lady for trying to take a costume off its hanger.)

Special bonus: Me and Stuart Zagnit! 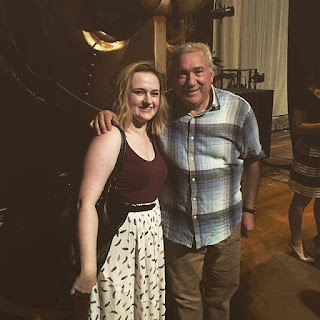