Well, tonight was eventful. I got out of the shower and went to look at Twitter and saw that there was a freaking tornado in my city. So of course I thought I was going to vomit, since I live on the 6th floor and assumed I'd missed the sirens because I'd been in the shower and was no inevitably doomed. I looked outside and saw that the dark scary clouds were still a wee bit away and made the executive decision that the library basement was much safer than the dorm basement. I gathered the essentials (laptop, its charger, my wallet, a snack and water) and went outside during a goddamn tornado warning in order to get to the library, which is about two blocks from my place. There was a group of people sitting outside the library watching the sky, which it this point looked massively ominous, but I thought that was stupid so I went inside and to the basement.

Now, I never looked back at my dorm building when I was outside, and I don't know what was happening while I was in my room, but sometime between when I was in the shower and when I got to the library basement, this happened: 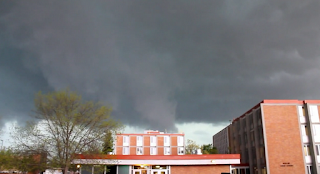 That's a funnel cloud above my building. An almost-tornado. Right there where I live.
I'm so glad I didn't see it live because I would have had an absolute mental breakdown. Tornadoes scare me so badly. So of course now I'm scared to go sleep in case the sirens go off again and I sleep through them. This is too much stress for finals week.