Twelve hours until my flight! What!!! I still can't even really believe it. Also, there are quite a few tickets left for Wicked on Thursday which means I'll probably be successful in rushing it and ahhh that's so exciting! Also, it's four months until my birthday! Everything is happening!

So I got my manicure today, and I ended up getting this really nice golden color - here's what it looks like on the nails of a stranger I found on the internet: 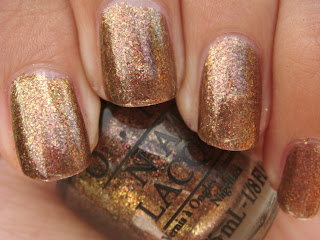 The manicure was really fun and the guy that did my nails was hilarious. The only drawback was the lotion he used...it smelled like weed and bananas. Not my favorite.