Last night was perfect. Well, actually it was freezing and I couldn't feel my hands or feet. But it was still perfect. Seminar was fantastic. Everyone cheered when Alan came on and I was just sitting there in disbelief. Like, wow, I'm watching Alan Rickman perform. Right now. So then the show ends and I knock over all the bitches in my way (err, what?) to get a good spot at the barricade by the stage door. I was about the sixth person out there, and was at the front of the barricade. I chatted with the ladies next to me, one named Kate and the other Ashley, who were both super lovely and fun. Jerry O'Connell and Hamish Linklater came around and signed our Playbills first while Alan was on the other side. Then Alan comes by and I'm like what the actual fuck it's Alan Rickman. So I told him I liked the show and he said thank you, and then the girl next to me asked for a hug and he declined but said he was open to handshakes, so I shook his hand. So basically, I met Alan Rickman and we touched. Ugh. No words can describe. My awesome dad was on the other side of the barricade and was nice enough to take a picture of me chatting with Alan. I'll post the picture below! Anyway, overall it was amazing and perfect and oh my god I met Alan Rickman. Oh my god. 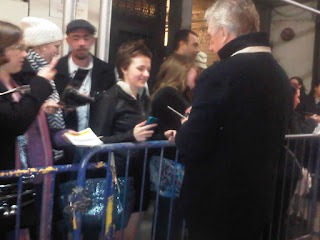 Yup. It was perfect.