It's another early morning tomorrow, so I'm off to bed! I'm trying to decide which perfume to wear though. I spritzed some of my Sugar Plum perfume in the air earlier and I think I'm still catching whiffs of it. It's definitely not the right time of year to be wearing that one, so I'll have to give it a go around Christmas time. 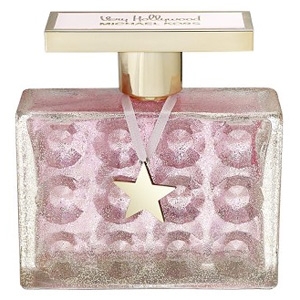 So this is Very Hollywood Sparkling by Michael Kors, the flanker/EDT version of Very Hollywood, which I've written about it the past. Despite not having gardenia like the original, it smells extremely similar to it. I think if I wore one on each wrist I could probably tell the difference, but just smelling this alone, it gives of the same powdery/musky white floral vibe as the original, and instead of a slight hint of raspberry near the beginning, it has blackcurrant- though I didn't really notice it. I think I'll be testing this one again, possibly side-by-side with Very Hollywood, to see the difference. I've got a big ol' bottle of Very Hollywood though, so I don't feel any rush to buy this one. (Plus, I like the bottle for Very Hollywood a lot better. VH Sparkling looks a little tacky.)