I can't believe it's already the 20th! March is flying by! Today I had a really nice day off, and decided I'd give this season of The Amazing Race a try. It is pretty gimmicky, and every season prior to this one always has that annoying, bickering dating couple. This season all the teams are dating couples, and half of the pairs had never met each other before starting the race. So there's a lot of bickering, and it's hard to watch. There have certainly been worse teams (Brendan and Rachel, to name one), but already there is at least one team that's getting on my nerves. There's also this ridiculous focus on social media with hashtags popping up every two minutes and designated "selfie phones" that each team has so they can take selfies throughout the race. So...extra gimmicky. Luckily, the destinations they've been to so far are all places I would love to go, so that's been great. They even went to a cat café in Thailand. We'll see how the season progresses from here. It's on a break until April 3rd so I've got time to take a breather from the arguing couples.

Perfume of the Day: Tilda Swinton Like This by Etat Libre D'Orange
Notes include immortelle, pumpkin, ginger, musk, and vetiver. 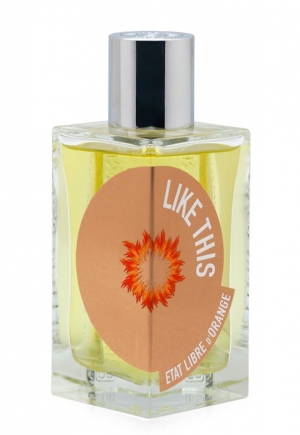 I was hoping to fall in love with this one. It's another sample that I ordered from LuckyScent and I was really excited at the prospect of what looked like a wonderful fall-time, pumpkin-scented fragrance. I was a little worried about the pumpkin note making it smell like a seasonal candle or air freshener, but luckily that's not the case. Unfortunately, it doesn't smell quite like I was hoping. I've owned a perfume with immortelle in it before (L de Lolita Lempicka), but I never really knew what it smelled like since it was never a strong note. Immortelle is the dominant note in this scent, from start to finish. It's a very strange smell that some people describe as curry-like. It's spicy and warm and vaguely floral, but also very herbal and slightly foody. The pumpkin plus immortelle combo makes this scent smell like an almost-gourmand; it's food-like, but not in the dessert way that a gourmand is. It does smell a bit like curry or some sort of spicy dish. It's like a kitchen. Not a bad smell by any means, but also much less sweet than I was anticipating. The drydown is all immortelle and unfortunately, it's just not a scent that I'm getting along with. It's not a bad smell, it's just a bad perfume, for me anyway. It doesn't feel like a smell that I want to wear to feel sexy or confident or pretty or anything that I look for in a perfume. It smell like a restaurant - a nice Indian one, but not something I want on my wrist. It's too herbal, the wrong kind of spicy and just not my cup of my wished-for pumpkin chai tea. ;)