I did things such as buying cat food and mailing packages today! Otherwise though, it was a pretty chill day. Even Cas has been super chill today.

In exciting news, Brad is going to be here in ONE WEEK! I am so super excited to see him.

Perfume of the Day: Alien Aqua Chic by Thierry Mugler
Fresh/citrus/aquatic/floral. Notes include ginger, freesia, lemon verbena, and amber.
I own: 60ml bottle. 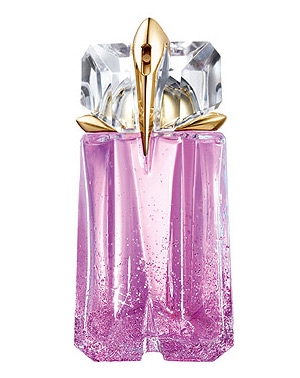 This was my first ever Thierry Mugler perfume and I love it endlessly. I was nervous to try a Mugler perfume since the (in)famous Angel has such a polarizing opinion surrounding it, and it's strong as hell. It's basically what started gourmand perfumes. The original Alien was also known for its massive sillage and longevity, though I preferred it to Angel. When I was offered Alien Aqua Chic is a swap, I decided to go for it despite never having smelled it before. I knew Alien was something I liked in moderation and this was supposedly a lighter, more aquatic version. Well, I fell in love with it and have been pursuing Alien and its flankers ever since. I actually swapped away my first bottle of this for something I wanted more and missed it so much that the next time I saw someone offering it in a swap, I sent them a bunch of things just so I could get my hands back on this beauty. And yes, the bottle is as pretty is it looks in the picture! The smell of this is definitely zestier and fresher than the original Alien and lacks a lot of the warmth of the amber, but you can tell it's a relative, despite sharing only one of the original notes. (How does Mugler do that, huh?) If you're curious about Mugler scents, try a flanker of Alien (there are quite a few and many are fantastic), as it's not quite as intense as Angel, but still noticeable and different. Don't let the Mugler name scare you! The scents are very different and often VERY strong, but there are some true gems in there.